Marriage is not an event but a process. Many people work very hard preparing for their wedding, sometimes forgetting that their journey is only beginning.

Before marriage, couples are merely experiencing some aspects of one another. After the wedding when they begin to live under the same roof and experience the “whole works,” there may be many facets of each other they may find difficult to accept and adjust to. This could even be as simple as the way we place our towels after use to more complex issues like the way we resolve conflicts.

It is therefore imperative that married couples constantly seek to understand one another, communicate with one another, and be intentional about committing to one another in order to grow a healthy marriage. Marriage involves a commitment to a lifelong process as it has been said, “Marriage is more like a marathon than a sprint.”

How do men and women differ emotionally, and are those differences caused by cultural influences or genetic factors?

Answer: No doubt, some of the differences in masculine and feminine characteristics are culturally induced. It is foolish, however, to discount the impact of genetics, physiology, and inborn temperaments in understanding the sexes. Radical feminists in the sixties and seventies tried to sell the notion that males and females are identical except for the ability to bear children. That is nonsense. Let me describe some of the differences between the sexes that appear to be determined, at least in part, by genetics.

The reproductive capacity of women results in greater need for security and stability. In other words, because of their sense of responsibility for children, females are less likely to take risks and gamble with the future. Though it varies in individual situations, there is typically a healthy tension between a man and woman that interests me.

He likes excitement, change, challenge, uncertainty, and the potential for huge returns on a risky investment. She likes predictability, continuity, safety, roots, relationships, and a smaller return on a more secure investment. These contrasting inclinations work to a couple’s best advantage. She tempers his impulsive, foolish tendencies, and he nudges her out of apathy and excessive caution. These have now begun to identify all the ramifications of sexual uniqueness

Related to this is a woman’s emotional investment in her home, which usually exceeds that of her husband. She typically cares more than he about the details of the house, family functioning, and such concerns. To cite a personal example, my wife and I decided to install a new gas-barbecue unit in our backyard. When the plumber completed the assignment and departed, Shirley and I both recognised that he had placed the appliance approximately six inches too high.

I looked at the device and said, “Hmmm, he sure made a mistake. That post is a bit too high. By the way, what are we having for dinner tonight?” Shirley’s reaction was dramatically different. She said, “The plumber has that thing sticking up in the air, and I don’t think I can stand it!” Our contrasting views represented a classic difference of emotional intensity relating to the home.

The sexes also typically differ in competitive drive. Anyone who doubts that fact should observe how males and females approach a game of ping-pong, Monopoly, basketball, volleyball, or tennis. Women may use the event as a backdrop for fellowship and pleasant conversation. For men, the name of the game is conquest. Even if the setting is a friendly social gathering in the host’s backyard, the beads of sweat on each man’s forehead reveal his passion to win.

This aggressive competitiveness has been attributed exclusively to cultural influences. I don’t believe it. It is a function of testosterone and the working of the masculine brain. As Dr. Richard Restak said in his book The Brain: The Last Frontier: “At a birthday party for five-year-olds, it’s not usually the girls who pull hair, throw punches, or smear each other with food.”

As I’ve indicated, there has been an effort in the past decades to homogenise the personality traits of boys and girls. The behaviour of which Restak wrote was perceived to have resulted from unfortunate cultural biases that could be overcome. Therefore, boys were encouraged to play with dolls and tea sets, and girls were given trucks and tools. It didn’t work. To the irritation of mothers with strong feminist beliefs, boys turned out to be depressingly masculine, and no amount of “cross training” would change that fact.

Finally, a maternal inclination apparently operates in most women, although its force is stronger in some than others. The desire to procreate is certainly evident in those who are unable to conceive. I receive a steady influx of sad letters from women who express great frustration from their inability to become mothers. Although culture plays a major role in these longings, I believe they are rooted in female anatomy and physiology.

These items are illustrative and are not intended to be exhaustive or to represent a scientific delineation of male and female differences. It is clear that there are two sexes, not one, both designed to fit together hand in glove. Neither is superior to the other, but each is certainly unique.

You’ve discussed briefly some of the physiological and emotional differences between the sexes. Could you list other physical characteristic unique to males and females?

Answer: Men and women differ in countless way, many of whom aren’t even conscious of. Here are just a few of those differences:

1. A woman has greater constitutional vitality, perhaps because of her unique chromosomal pattern. Normally, she outlives a man by a few years. Females simply have a stronger hold on life than males, even in the uterus. More than 140 male babies are conceived for every 100 females; by the time birth occurs, the ratio is 105 to 100, with the rest of the males dying in spontaneous abortions.

2. Men have a higher incidence of death from almost every disease except three: benign tumours, disorders related to female reproduction, and breast cancer.

3. Men have a higher rate of basal metabolism than women.

4. The sexes differ in skeletal structure, women having a shorter head, broader face, less protruding chin, shorter legs, and longer trunk. The first finger of a woman’s hand is usually longer than the third; with men the reverse is true. Boys’ teeth last longer than do those of girls.

5. Women have a larger stomach, kidneys, liver, and appendix, and smaller lungs than men.

The glands work differently in the two sexes. For example, a woman’s thyroid is larger and more active; it enlarges during menstruation and pregnancy, which makes her more prone to goitre, provides resistance to cold, and is associated with the smooth skin, relatively hairless body, and the thin layer of subcutaneous fat that are important elements in the concept of personal beauty. Women are also more responsive emotionally, laughing and crying more readily.

8. Men are 50 percent stronger than women in brute strength.

9. Women’s hearts beat more rapidly than those of men (80 versus 72 beats per minute). Their blood pressure (ten points lower than men) varies from minute to minute, but they have much less tendency to high blood pressure – at least until after menopause.

10. Female lung capacity is about 300 percent less than in males.

11. Women can withstand high temperatures better than men because their metabolism slows down less.

12. Men and women differ in every cell of their bodies because they carry a differing chromosomal pattern. The implications of those genetic components range from obvious to extremely subtle.

For example, when researches visited high school and college campuses to study behaviour of the sexes, they observed that males and females even transported their books in different ways. The young men tended to carry them at their sides with their arms looped over the top. Women and girls, by contrast, usually cradled their books at their breasts, in much the same way they would a baby.

Who can estimate how many other sex-related influences lie below the level of consciousness?

This article was written by Focus on the Family Malaysia and the Questions and Answers are extracted from “Complete Family and Marriage Home Reference Guide”  with permission.

PrevQ&A: Infidelity In A Husband
Words that Value Your SpouseNext 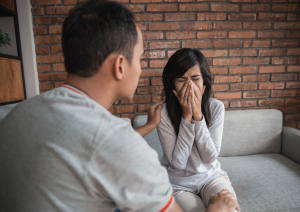 During this global pandemic, your spouse may experience loss. Learn how to help your spouse grieve the loss. 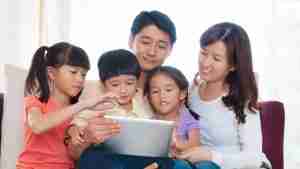 How do you set effective boundaries that build character and establish a proper relationship with your teen?

Gratitude rescues us from the trap of negative thinking and helps us enjoy life more. Learn how gratitude is one of the seven traits of effective parenting.

Q&A: Starting the conversation about puberty

Question: Our daughter is almost 10 years old. I’ve assumed that “the conversation” about puberty was still a ways off, but now I’m not so

Q&A: Getting my talking wife to understand

Question: Why does my wife always want me to talk to her? When I’m tired and just want to relax, she launches into an emotional

Q&A: Staying together for the sake of our children

Question: My marriage of 17 years is basically dead. My husband and I are both done with it, but we have agreed that we’ll stay