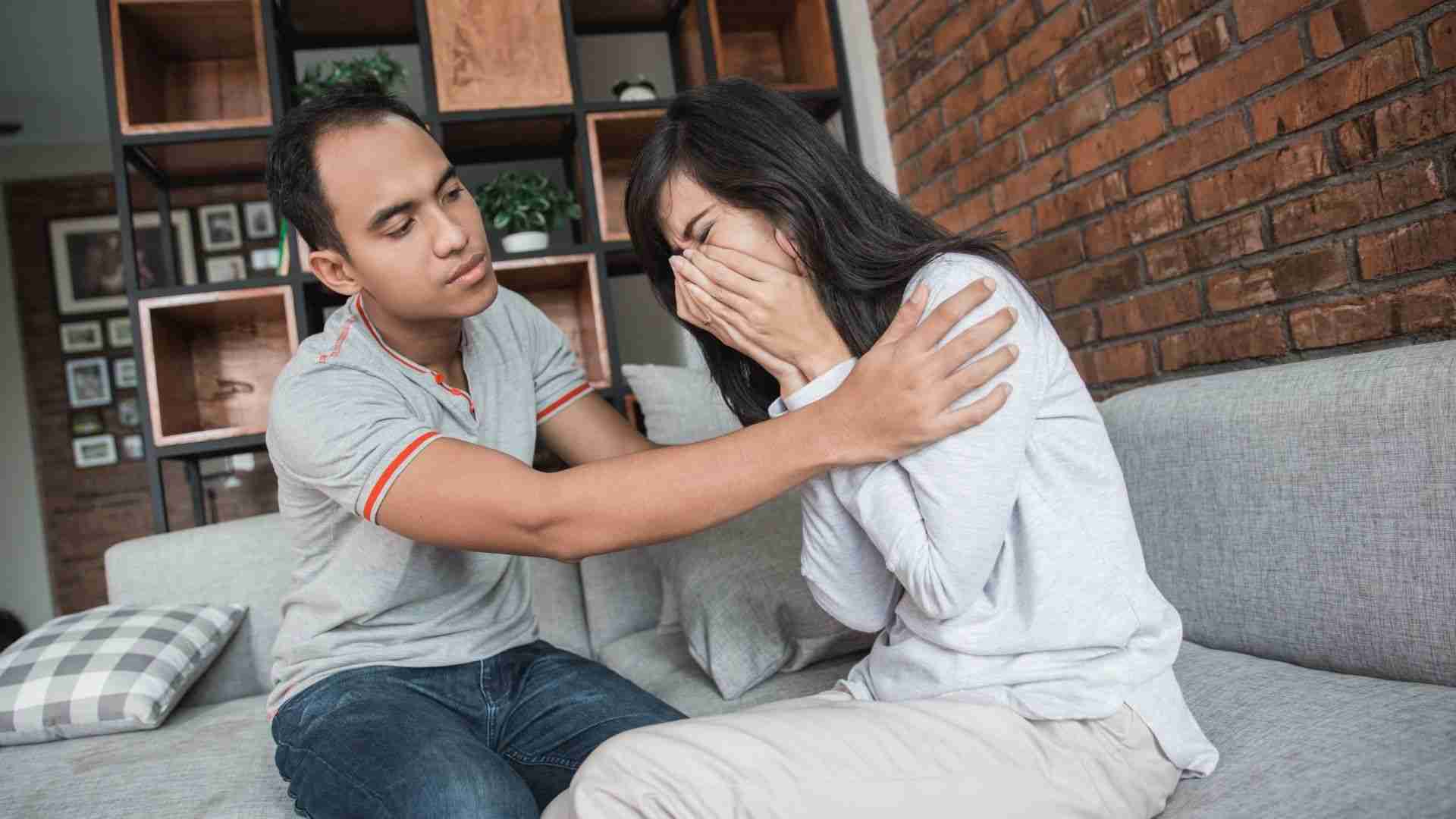 How does a parent recover and move on from the tragedy of their child committing suicide?

Even though six years have passed, I can still clearly picture the tragic evening. My fingers clicked on the laptop keyboard as my 14-year-old daughter walked into the room.

“Is it OK if I go to the river for a little while before I start my studying?” Jenna asked. I turned from the screen to look at her. She stood just inside the front door; Christmas tree lights sparkled to her right.

“Of course,” I said, thinking nothing of the seemingly innocent question. I thought she needed some breathing space after her first day back to school from winter break. “Just make sure you’re back in time to finish your homework and eat dinner.”

I resumed editing the manuscript in front of me. But then the sun went down, and Jenna hadn’t returned. My husband arrived home from work and started searching on foot, while I loaded my two younger children in the van and circled the subdivision. As word got out, neighbours and friends showed up to look for her. Police and their K-9s combed through the woods. Fearful that Jenna had been abducted, I paced in front of the fireplace hearth and hoped that my girl would be found. An hour later a friend entered the family room and told my husband and me to sit down.

“Your daughter is dead,” he said hesitantly. “It appears she took her own life.” The news shattered my world.

No one is immune

I never imagined this would be my story. Though by no means perfect, my family was living the “normal” life of a loving, close-knit family of five. Jenna was my oldest daughter. She earned A’s at a magnet school for the gifted and talented, played clarinet in an all-region band and served those around her. She was bright and outgoing, happy and well-liked. Becoming a pediatric doctor topped her long list of dreams and goals.

My husband worked as a counsellor and case manager for a nonprofit that helps the homeless. I taught high school English. Teenagers were my joyful focus. Due to the nature of our work, both my husband and I knew the signs of suicidal behaviour. Jenna exhibited none of them.

Because Jenna delighted in telling stories, my husband and I were aware of the events that transpired in our daughter’s world. Neither of us fully realised, however, that bullying, mean words and exclusion at school had led Jenna to buy into lies about her purpose and worth, which distorted her perspective and caused depression to take root.

Adolescents often struggle to see beyond the immediate. With no warning or previous attempts, Jenna ended her life in a desire to stop the pain she’d hidden. In Aftershock: Hope, Help, and Healing in the Wake of Suicide, counsellor and suicide-loss survivor Dr. David Cox writes, “There is no suicidal personality type. Suicide tends to be a cross-cultural phenomenon affecting all socioeconomic groups.” Highly intelligent teens, who tend to think and feel deeply, certainly aren’t immune.

The devastation of suicide

A child’s suicide impacts a family more than most people would imagine. When a child leaves for college, joins the armed forces, takes an out-of-state job or marries, the dynamics of the remaining family change. Similarly, a child’s suicide alters everything. Family members must readjust and aren’t afforded the opportunity to prepare or say goodbye.

Grief entered as a constant companion, as my family dealt with the unanswered questions and survivor’s guilt that accompany suicide. Although grief is part of the human experience, it’s also difficult to manage — especially when it affects family members at different times and in different ways.

Dr. Frank Page, who lost his own daughter to suicide, describes grief’s emotional upheaval as waves that start, crest and recede. The surges of grief decrease in frequency and intensity over time but never fully subside. Missed milestones or special calendar dates can create waves. Other times they arise for no apparent reason.

One of my high school students recently gave me tickets to see a concert. I’d anticipated the event for weeks. Though the show was incredible, I struggled to fully enjoy it the way I normally would. Halfway through, I figured out why.

The event took place at the exact location as the high school graduation Jenna never attended. I’d enjoyed a few other concerts at the arena, but this time I sat in the same place I did for the school’s graduation ceremony. That’s all it took to trigger vivid memories and generate a new wave.

I recalled my daughter’s empty chair — with her unpackaged cap and gown — that sat on the front platform, remembered walking across the stage to receive an honorary diploma in Jenna’s name, and recollected seeing a classmate who’d spoken the hurtful words that tore my daughter apart. Buried under the wave of grief, I withdrew and became sadly silent, which wrecked what should have been a beautiful night alongside my husband.

Although suicide is a one-time occurrence, its impact on a family lasts a lifetime.

Even though I hate the reason for increased awareness and understanding, a child’s suicide can wake us up and change our perspective. It reminds us that depression is real — but it lies.

My daughter was a prolific writer, so I shouldn’t have been surprised that she left behind a single-spaced, three-page note of explanation. My thoughts reeled the day after Jenna’s death as a few close friends, my husband and I braced for the reading of the letter police had discovered on her USB flash drive. Counsellors tell us her words are gifts: Suicide victims seldom leave behind any indication of why they cut short their lives.

Every time I reread the letter, however, I shudder at the false accusations that somehow snaked their way into Jenna’s mind. To summarize, this is what her note said:

I’m too unattractive and unpopular to be loved.

I’ve fulfilled my reason for being here.

No one will miss me when I’m gone.

Depression is a hopeless fight.

Despite how Jenna felt in the moment, none of the statements were true. But unless I recognise the thoughts and change the way I think, when depression clouds my perception I can believe those same lies. Still, rather than giving in to depression, I choose to hold on, ignoring my tainted perspective in the moment.

Hope for getting through a child’s suicide

Families never really get over a child’s suicide, but they can get through it. The daily ache of my daughter’s absence lingers below the surface of nearly everything I do. Nevertheless, my family is surviving the aftermath of loss. Although we still struggle, we’re beginning to thrive.

Granted, when the deep sadness is especially heavy, connection is the last thing I desire. I feel damaged by suicide’s hit, different, ostracised by the loneliness of this journey. It’s easy to choose isolation over letting others in.

Sometimes I succumb to grief and wallow in the what-ifs and could-have-beens. Sometimes I simply don’t want to say, “I’m fine,” when friends ask how I’m doing, yet I don’t want to burden others by sharing the struggle inside.

Nearly every time I say yes to connection, however — whether accepting an invitation to lunch, participating in an activity or serving others — I feel more encouraged, hope-filled and alive. The same has proven true for my husband and children.

Two weeks after Jenna’s death, I chose to return to the classroom. My first day back, I cried in front of my students, who were Jenna’s age. Some were her close friends. It hurt to do life with them.

No one expected me to return to teach teens when I’d lost mine. But in retrospect, it’s one of the best decisions I’ve ever made because I needed them. I still do. A stack of vulnerable notes I’ve received indicates the teenagers have likewise needed me. Connection helps break depression’s lies.

Survivors of suicide loss need you

Three weeks seldom go by that I don’t receive an email from a friend who knows someone who has lost a loved one to suicide. Most want to reach out, but in the awkwardness of the situation, they don’t know what to do. The first suggestion I give others, from what I’ve experienced, is to simply show up — in some small manner that says you care. Resist the urge to stay away.

This can take several forms. Short texts, emails, phone messages or written notes work well. Deliver a meal during the first couple months after the loss. Survivors with younger children appreciate playdate invitations — both to let the children laugh and to provide a break from parenting while grieving. I was also touched whenever friends, unhesitant to re-enter my home despite Jenna’s obvious absence, stopped to visit.

One of the best gifts I received occurred when a friend offered to watch my 7- and 10-year-olds a month after Jenna’s death so I could start running. After I arrived at her house, her son, one of my former students, came downstairs and said, “I’m going to run with you.” Without the accountability and community of a running partner, I wouldn’t have persisted through months of discomfort. His willingness to show up helped me isolate myself less and take care of myself more.

Reaching out long after the initial weeks makes a huge difference, too. Research shows that close family members often grieve the loss of a child to suicide for at least four to five years — far longer than the loss of a parent or spouse to “natural” death.

If you are dealing with a depressed teen or you need help regarding a child’s suicide, you can call 03-3310 0792 or email support@family.org.my.

PrevHow to Start the Conversation With Your Children About Suicide

Don’t Divorce Because of the Movement Control Order (MCO)

Being quarantined together doesn’t help some couples grow closer. The added strain makes existing problems worse. Can you improve your relationship instead of filing for divorce?

Showing Grace to Your Family in Close Quarters

Working from home isn’t easy, especially when interruptions result in harsh words, tears or slamming doors. Learn how to turn frustration into authentic communication, and show grace to your family.

An Attitude of Gratitude: Going Beyond Please and Thank You

Gratitude is more than just saying “Thank you” Children need to learn the meaning behind the words. Find our more about how you can teach your children about being thankful.

Question: Our son won’t do his homework! He’s smart and capable; he’d just rather play or watch TV. I don’t want to see him fall

Q&A: Finding the spark in our marriage

I sense that the original “shimmer” of our romance is beginning to fade. Is something wrong with us? Are we “falling out of love”?

Question: What’s your opinion about overnight group activities for primary school children? We want our children to have fun with their friends, but we’re concerned