As a married couple you are on the same team. Therefore, make decisions and divide household responsibilities in a way that honours both people.

Sharing responsibility means being on the same team. Thriving couples recognize their unique God-given roles and abilities and work together to manage everyday responsibilities. They utilize their individual gifts and talents as they negotiate ways to divide household chores fairly (Philippians 2:4). They work to reach a consensus on the question of household chores so that both partners feel satisfied with the distribution of responsibility.

In Genesis Chapter One we’re told that the first thing God did after creating Adam and Eve “in His image, male and female” was to entrust them with a shared responsibility: “Be fruitful and multiply; fill the earth and subdue it; have dominion over the fish of the sea, over the birds of the air, and over every living thing that moves on the earth” (Genesis 1:28). Mutual cooperation was basic to the divine design for marriage from the very beginning.

By way of contrast, when you consistently feel as if you are in a never-ending battle over household responsibilities and roles, your relationship begins to feel adversarial. If you and your spouse constantly go from being teammates to opponents, your marriage will quickly start to feel unsafe. And when unresolved power struggles lead to a relational tug-of-war over who will do what in order to manage the home, the result can fracture the bond that holds a couple together.

How do you avoid that kind of disaster? Here are a few ideas:

Once upon a time men and women entered into matrimony with very clear ideas about how the division of labour would be handled: he would go off to work and “bring home the bacon;” she would stay home, cook, clean, and raise the children. Things are different now. Today many husbands and wives perceive the allotment of housework as unfair and end up in conflict.

The problem is complicated by the fact that even in 21st century America it’s still common to think in terms of “male” and “female” chores, even though the Bible doesn’t specifically support the notion that only women should cook and only men should calculate the budget and finances. As a result, whether they realize it or not, couples tend to take their cues from their parents’ example. This can lead to problems if unspoken assumptions and misunderstandings are allowed to explode in anger and arguments over the sharing of household tasks. Recognizing and exposing the sources of this conflict is the first step towards a solution.

The good news is that according to a Pew Research Poll, sharing household chores ranks as the third highest issue associated with a successful marriage — behind only faithfulness and good sex. This means that if you can learn to share chores, your marriage will have one of the hallmarks of unity.

Have you heard about the other way of writing the word “intimacy”? — “INTO ME, SEE.” There’s a valuable piece of marital wisdom embedded in this clever play on words.

For modern married couples, a fair and mutually satisfactory plan for dividing up household chores begins with mutual understanding. It’s a matter of really knowing your mate inside and out, learning about his or her special gifts and talents, finding out what makes him or her tick, and discovering what he or she really enjoys doing.

We’ve spoken in another place about author Charles Williams’s idea of co-inherence. As Williams saw it, true intimacy is not so much a matter of seeing into one’s mate as it is of being in one’s mate. It’s about two becoming one flesh — of identifying so closely with another person that the two of you start finishing each other’s sentences and looking at the world from each other’s point of view.

When it’s “I in you and you in me,” nobody has to ask any questions. There’s no need to jockey for position or fight for a fair division of labour. The further a man and a woman move into the core of that mysterious phenomenon called co-inherence, the less they have to hassle over who cooks dinner and who takes out the trash. And it’s at that point that the marriage really begins to work. It’s all a matter of getting your priorities straight.

By this point it should be obvious that this is another one of those areas in marriage where good communication is absolutely essential. If you want to get a handle on your respective expectations for the relationship and gain a deeper appreciation for your spouse’s unique abilities and talents, you need to talk about these things openly and honestly. If you can be flexible enough to allow for exceptions to accepted “rules” and work out a division of labour that places more emphasis upon giftedness than gender, you’ll discover that it is possible to negotiate a plan that’s agreeable to both partners.

Remember, the way an individual is “wired” or designed by God can contribute to widely different expectations within a household. Some spouses do more housework because they actually prefer tidier homes. Others enjoy a house with that “lived in” look. If you want to work together as a team, you have to begin by discussing these differences and achieving some kind of a meeting of the minds.

Couples with vibrant and successful relationships tend to be those who have found mutually satisfactory ways of settling the “chore wars” between themselves. In other words, these husbands and wives pay relatively little attention to the shifting norms of contemporary society or the expectations of family and friends. Instead, they make it their goal to function as a unit. They understand that the only thing that matters is how they work together, not what other people think. By means of discussion, negotiation, and written agreements they hammer out a plan that preserves fairness and equity in the way it defines roles and divides household tasks and responsibilities.

Once you reach this stage in the game it’s important to write everything down and make a chart that clearly designates each portion of the overall workload as “yours,” “mine,” or “ours.” This agreement should be revisited and updated from time to time to accommodate the shifting realities associated with the changing seasons of life. The secret here is to redefine “winning” as something that makes both spouses happy.

Back to Recommended Resources 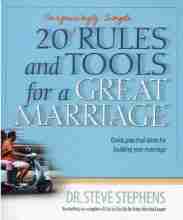 20 (Surprisingly Simple) Rules and Tools for a Great Marriage

Best-selling author Dr. Steve Stephens offers concrete yet simple ways to build marriages today, even when life speeds by at a frantic pace. Along with a prayer to ask for God’s help, each chapter offers ideas and tools that make following rules like “Accept Differences,” “Listen Carefully,” and “Compliment Daily” easy. Readers will be surprised at how applying these simple rules can make a good marriage even better . . . or keep a struggling marriage from falling apart.

Get the book
Close Menu